pictures from the retreat

Here is a link to the flickr account of ACallToYarns who posted his pictures to share. Thanks for sharing Joseph.
Posted by Knits4Bears at 2:03 PM No comments:

I just spent the weekend with Lou, Steve and Rob in South Carolina at the first SEMKR retreat and had a great time. I've always wanted to attend one of the men's knitting retreats and they have been too far away or too cost prohibitive for me. Now we have started a new tradition here in the Southeast thanks to Rusty who put the whole thing together! It was so much fun getting to know other men from around the area and spend the weekend knitting, talking, taking classes and learning new techniques. It just went by WAY too fast. The retreat center, Asbury Hills Retreat Center, was very nice and comfortable and a great place for our retreat. We had two large cabins with very nice rooms. The food was good, not gourmet by any means, but very tasty. I met several guys that I hope I will see again in the future at some point. Hopefully all will return next year.

I took several pictures on our field trip to the North Woods Farm on Saturday to see the alpacas and mill. We had a great time getting to see all the alpacas and a tour of the mill by Teri. They also have a sweet little dog in the shop named Molly that I fell in love with and would have liked to sneak home in my bag. I bought 1.5 pounds of dark gray/black cria roving and I can't wait to see how it spins up.

I have two knitting projects going on the needles right now. One is a shawl for one of Michael's sisters called the Garden Path Shawl and I'm knitting it with Lion Brand Woolease in a light heather gray. I thought the pattern would be fairly simple, and it is since it is all garter stitch (no purls), but there are sooo many yarn over's and decreases on some of the pattern lines that it takes more concentration than I thought it would. Every other row is just plain knit though, so that's a no-brainer row at least. The other project is the Hemlock Ring Blanket from Brooklyn Tweed. I'm using some Cherry Tree Hill kettle dyed yarn I bought years ago from Whole Nine Yarns when they first opened. It's mostly dark purple with just a little pink subtly mixed in. I'm thinking about adding in some short rows between the "fans" and then continue on in the round to make a larger blanket. I need to take some pictures and add them to my Ravelry page too.

Once I get the pictures from the retreat downloaded I'll share them.
Posted by Knits4Bears at 1:34 PM No comments:

I spent the afternoon with friends Jane, Diana, Hali, and Rob at the International Horse Park in Conyers today. There were a lot of beautiful alpacas and we even got up close and personal with one really friendly one. She was so incredibly calm and there were a several people petting her at the same time. 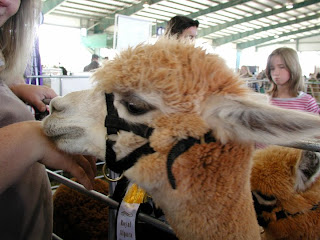 Here are more pictures from the afternoon. 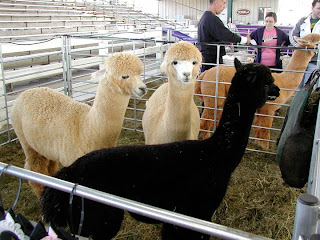 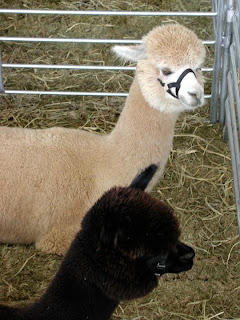 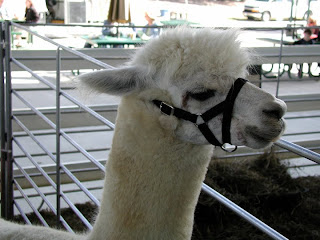 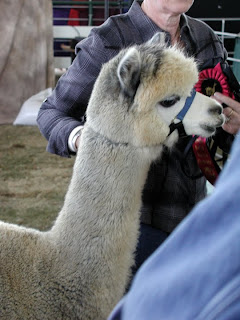 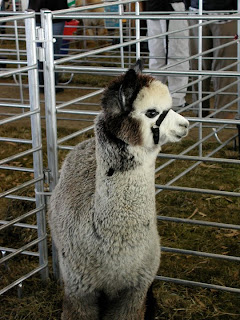 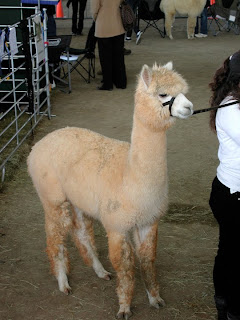 I also purchased some Suri alpaca roving to spin up later. It's a mixture of grey, tan and white from an alpaca named Natasha. The owner said she is truly an evil animal, but the yarn will be beautiful. I'll try to post the resulting yarn later.

...and then on the way back to Jane's house I spotted this on the side of the road. We figured it was probably a remnant of someone's Halloween costume. It just kinda stuck out as we drove by that there was hair on the street marker. 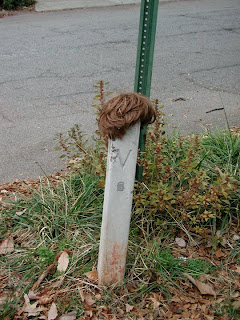 I finished the Welcome Back Old Friend sweater yesterday while at Knitch for the Sunday knitting social. It took exactly two months of on and off knitting. It is a little shorter than I thought it would be (maybe the belly doesn't help) but I'm happy with the result. It's a warm one and will be my official SAFF sweater this year.

Thanks to Regan for taking the picture for me right after I finished it. She tweeted about it too. :)

I'll take more pictures later of just the sweater (without the baby) when I get a chance so the collar is visible and not hidden by my beard.
Posted by Knits4Bears at 2:42 PM 4 comments:

It's been quite a while since my last post. I really do mean to post more often than bi-annually. Not that there hasn't been anything to post about, I just haven't had the inclination.

I guess the best way to start is with what I've been working on lately.
I started making a sweater in March "Welcome Back Old Friend" by Kathy Zimmerman. It was in Interweave Knits Fall 2002. The pattern is also available for download from Ravelry.

I'm using yarn that I bought a few years ago at SAFF. It's a blend of rayon/linen/acrylic and it's machine washable. (at least they said it was)

The front and one sleeve are on the blocking board drying now and I'll probably be able to block the other two tonight. I have to put the blocking board in the other room and block the door with a wire gate. I do that so the air can circulate in the room and also to keep Bob out as he likes to pull out the pins. I guess it's the colorful pinheads that attracts him or maybe he's just a bastard-cat. Probably the latter.

Once it's all together and the neck it finished I'll post some pictures of the finished sweater.

I had my third hernia surgery (within the last 15 years) the last week of March and it' all healed up nicely. I now have a large exclamation point scar on my belly with my belly button as the period!

Sorry, no pictures of this.

Michael and I were supposed to go to New York for his oldest son Nicks wedding in June, but we just got the invitation last week (with the date of the wedding which wasn't a sure thing yet) and now we can't affford to go. We decided to use our vacation time and considerably less dinero elsewhere. It looks like we are headed to Arkansas to spend a week with family in a cabin. We tried to locate somewhere central to just about everyone so no one person has to travel too far. It's near Hot Springs and close to a lake so maybe I'll get some swimming in this year. I miss having a lake closeby to go swimming.
Posted by Knits4Bears at 8:07 PM 2 comments:

It's official, Michael and I both are down with the swine flu.
Now we don't have to worry about getting the shot.
Posted by Knits4Bears at 7:25 PM 4 comments:

We have a new member of the family.

Her name is Iris and she's a Pekingese. We adopted her from a rescue shelter and she's 2 years old. We have a second one on the way this weekend and Michael will probably pick her up on Saturday. I don't know what name he and David have decided on. I'll post a picture of her when she gets here.

So far Iris hasn't had an opportunity to "meet" the cats. I hope she and the cats will get along together. For the most part the dogs will be downstairs and the cats will be upstairs most of the time anyway.
Posted by Knits4Bears at 8:23 PM 4 comments: